The Divine Principle
The New Revelations of Rev. Moon 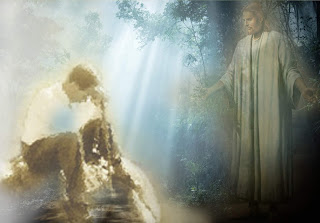 "Jesus had appeared to me as a boy of sixteen because he wanted me to know the root of the Original Sin that humankind had committed and to bring about a world of peace where sin and the Fall would no longer exist.

It was the night before Easter in the year I turned sixteen. I was on Mount Myodu praying all night and begging God in tears for answers. Why had He created a world so filled with sorrow and despair? Why was the all-knowing and all-powerful God leaving the world in such pain? What should I do for my tragic homeland? I wept in tears as I asked these questions repeatedly."

"Early Easter morning, after I had spent the entire night in prayer, Jesus appeared before me. He appeared in an instant, like a gust of wind, and said to me, “God is in great sorrow because of the pain of humankind. You must take on a special mission on earth having to do with Heaven’s work.”

That day, I saw clearly the sorrowful face of Jesus. I heard his voice clearly. The experience of witnessing the manifestation of Jesus caused my body to shake violently, like a quaking aspen’s leaves trembling in a strong breeze. I was simultaneously overcome with fear so great I felt I might die and gratitude so profound I felt I might explode.

Jesus told me what I would have to do

Jesus spoke clearly about the work I would have to do. His words were extraordinary, having to do with saving humanity from its suffering and bringing joy to God. My initial response was, “I can’t do this. How can I do this? Why would you even give me a mission of such paramount importance?” I was truly afraid. I wanted somehow to avoid this mission, and I clung to the hem of his clothing and wept inconsolably.

I was at a loss over what to do. What was clear was that I had received a special mission from Heaven. It was such a huge and tremendous responsibility. I shuddered in fear to think that I might not be able to handle it on my own. I clung to prayer even more than before, in an attempt to quiet my confused heart. But even this had no effect. No matter how much I tried, I could not free myself for even a moment from the memory of having met Jesus."

The Answers After 9 Years of Prayer

"I kept detailed diaries of all the new realizations that I had each day. On days when I had a great number of such realizations, I would fill an entire diary. I was receiving answers to many of the questions that I had struggled with over the years. It was as if my years of prayers and search for truth were being answered. It happened in a short time, as if a ball of fire were passing through me.

During this time I had the realization, “The relationship between God and mankind is that of a father and his children, and God is deeply saddened to see their suffering.” In this moment all the secrets of the universe were resolved in my mind.

Suddenly, it was as if someone had turned on a movie projector. Everything that had happened since the time humankind broke God’s commandment played out clearly before my eyes. Hot tears flowed continuously from my eyes. I fell to my knees and bowed my head to the floor. For the longest time I couldn’t get up... Nine years after my encounter with Jesus, my eyes had finally been opened to the true love of God."

"God created Adam and Eve and sent them into this world to be fruitful, to multiply, and to bring about a world of peace where they would live. But they could not wait for God’s time. They committed fornication and bore two sons, Cain and Abel. The children who were born from the Fall did not trust each other and brought about an incident where one brother murdered the other.

The peace of this world was shattered, sin covered the world, and God’s sorrow began. Then humankind committed another terrible sin by killing Jesus, the Messiah. So the suffering that humanity experiences today is a process of atonement that it must pass through as God’s sorrow continues."

God Wants a World of Peace and Happiness

"I had received God’s serious word to atone for the sins of humanity and bring about the world of peace that God had originally created. The world of peace that is God’s desire is not someplace we go to after death. God wants this world, where we live now, to be the completely peaceful and happy world that He created in the beginning. God certainly did not send Adam and Eve into the world for them to suffer. I had to let the world know this incredible truth.

Having discovered the secrets of the creation of the universe, I felt my heart become like a calm ocean. My heart was filled with the word of God. It felt as though it might explode, and my face was always shining with joy." PEACE-LOVING GLOBAL CITIZEN

"With the fullness of time, God has sent one person to this earth to resolve the fundamental problems of human life and the universe. His name is Sun Myung Moon. For several decades he wandered through the spirit world so vast as to be beyond imagining. He trod a bloody path of suffering in search of the truth, passing through tribulations that God alone remembers. Since he understood that no one can find the ultimate truth to save humanity without first passing through the bitterest of trials, he fought alone against millions of devils, both in the spiritual and physical worlds, and triumphed over them all. Through intimate spiritual communion with God and by meeting with Jesus and many saints in Paradise, he brought to light all the secrets of Heaven.

The disclosure that's happening now "represents existential threat, for the first time in history, to the Deep State apparatus that has controlled information and the group thinking for the last 500 years. For the first time ever, they stand to lose everything that they had, because they cannot keep the lead on their lies." (1)


The words proclaimed on these pages are only a portion of this truth. This volume is merely a compilation of what his disciples have hitherto heard and seen. We believe and hope that when the time is ripe, more profound portions of the truth will be published." INTRODUCTION: DIVINE PRINCIPLE
Posted by ФЕДЕРАЦИЯ ЗА МИР